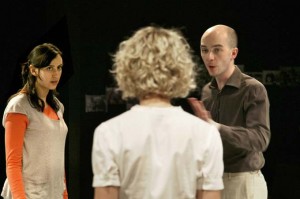 Oh Well Never Mind Bye by Steven Lally is a daring, compelling and darkly comic political drama exploring the workings of the media in the era of 24-hour news, against the background of the shooting by police of Jean Charles de Menezes. Tom directed the world premiere of this critically acclaimed play at the Union Theatre in July 2009.

21 July 2005. James Fisher’s news team are struggling to report the day’s events in time to meet their evening deadline. When police marksmen shoot a man dead at Stockwell underground station the next morning, the team are caught between the need to report the truth and a combination of political pressure, professional rivalry, and personal resentment.

**** Critics’ Choice “Steven Lally’s new play rapidly builds into a relentless, meticulous critique of the British media. At the same time, it’s got proper characters and a cracking storyline…Tom Mansfield’s excellently acted production astutely uses the Union’s intimate space in-the-round… This is essential viewing for anyone who cares about the future of our newspapers” Andrew Haydon, Time Out

*** “This lively, pugnacious play…raises vital issues about a world in which journalists rely on official handouts rather than investigative reporting…Lally’s arguments hit home: not least the desk-bound nature of modern journalism, the supine dependence on press releases and the subordination of truth to job security…guaranteed to make journalists twitch uncomfortably in their seats.” Michael Billington, The Guardian